Want to find out more about our products and download our App?

The Environmental Protection Agency (EPA) estimates there are 6 to 10 million lead service lines in the country. Parts of the USD 1trn Infrastructure Investment and Jobs Act (IIJA) take aim at bolstering state and local utility efforts to address drinking water infrastructure over the next five fiscal years (FY22-FY26).

Improving water infrastructure on a local level requires financial resources that many small, local communities don’t have. IIJA could amount to the largest federal investment in water infrastructure in history. To achieve clean water goals, it’s necessary to address lead pipes and toxic chemicals in the water.

Lead service lines are water pipes in the ground that carry water from the water main under the street to residences.  According to the Natural Resources Defense Council, lead pipes are likely in all 50 states.

The recent developments in City of Benton Harbor, Michigan highlight the lead pipe issues that cities across the country are grappling with and the ongoing saga in Flint, Michigan provides a glimpse of the time and complexity involved in addressing this problem.

Below is a comprehensive list of programs funded in IJJA. Where applicable, the section number in IIJA is provided. All programs listed would be funded for five years (FY22-FY26). 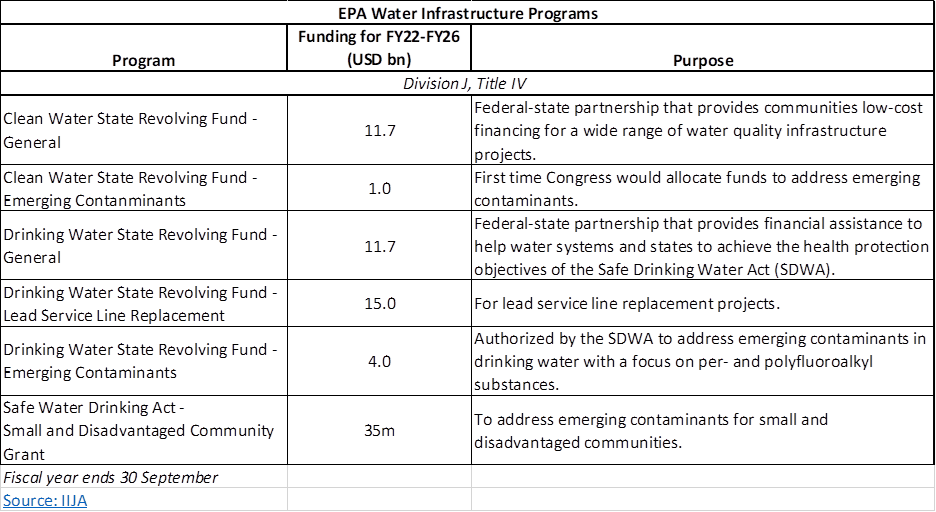 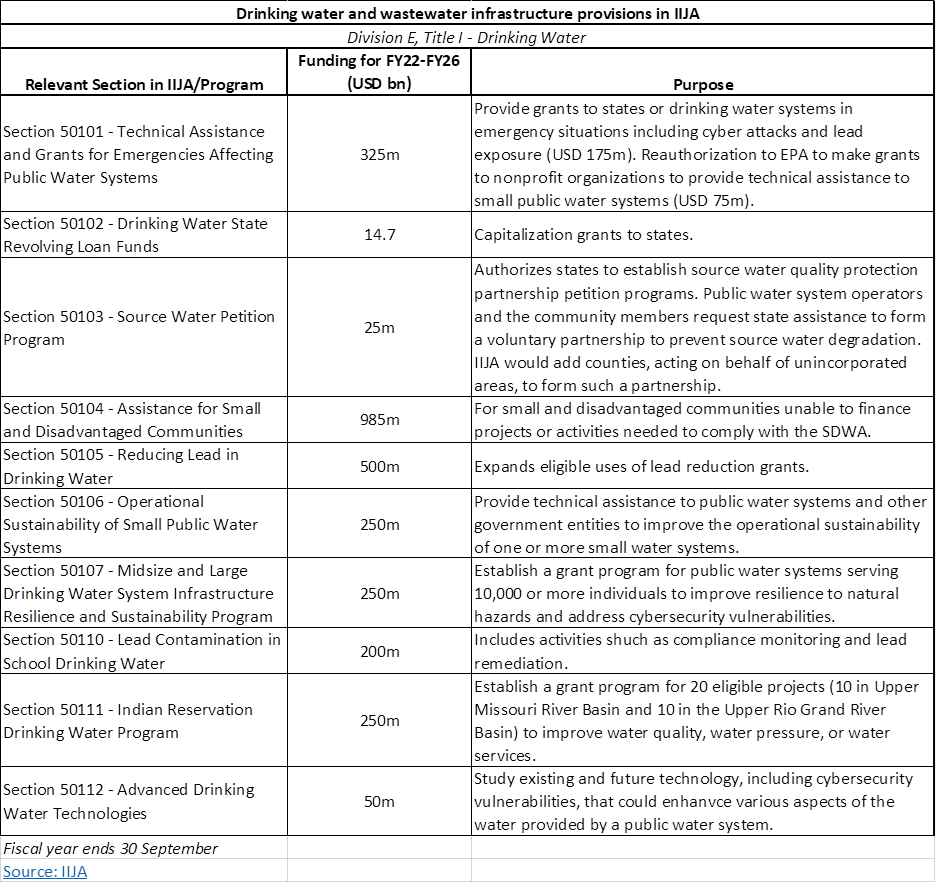 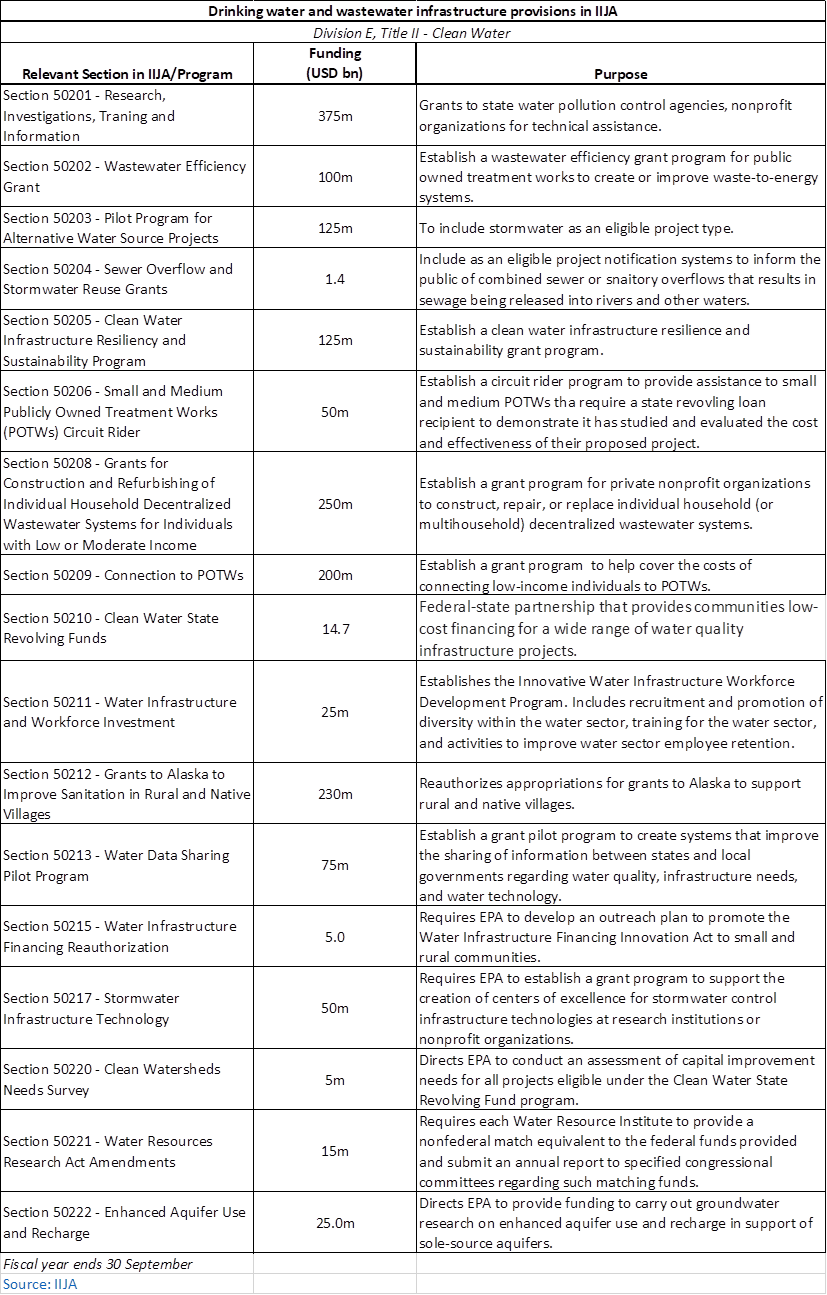 Given the scope of the problem, it is likely that additional funding will be required to substantively address the nation’s drinking water and wastewater infrastructure needs. This raises the risk of municipalities having to unexpectedly redirect limited resources to a potentially catastrophic and long-lasting situation.

On 10 August, the US Senate passed on a bipartisan basis the USD 1trn IIJA, also referred to as H.R. 3684. The IIJA focuses on “hard infrastructure.” The IIJA will not get a vote in the House of Representatives until the fate of the USD 3.5trn “soft infrastructure” legislation proposed by congressional Democrats is resolved.

As these negotiations continue, Debtwire Municipals, through our Bill in Brief series, will write periodic summaries on elements of the IIJA that directly affect state and local governments.

We use cookies on our website to give you the most relevant experience by remembering your preferences and repeat visits. By clicking “Accept”, you consent to the use of ALL the cookies. However you may visit Cookie Settings to provide a controlled consent.
Cookie settingsACCEPT
Manage consent

This website uses cookies to improve your experience while you navigate through the website. Out of these cookies, the cookies that are categorized as necessary are stored on your browser as they are essential for the working of basic functionalities of the website. We also use third-party cookies that help us analyze and understand how you use this website. These cookies will be stored in your browser only with your consent. You also have the option to opt-out of these cookies. But opting out of some of these cookies may have an effect on your browsing experience.
Necessary Always Enabled
Necessary cookies are absolutely essential for the website to function properly. These cookies ensure basic functionalities and security features of the website, anonymously.
Functional
Functional cookies help to perform certain functionalities like sharing the content of the website on social media platforms, collect feedbacks, and other third-party features.
Performance
Performance cookies are used to understand and analyze the key performance indexes of the website which helps in delivering a better user experience for the visitors.
Analytics
Analytical cookies are used to understand how visitors interact with the website. These cookies help provide information on metrics the number of visitors, bounce rate, traffic source, etc.
Advertisement
Advertisement cookies are used to provide visitors with relevant ads and marketing campaigns. These cookies track visitors across websites and collect information to provide customized ads.
Others
Other uncategorized cookies are those that are being analyzed and have not been classified into a category as yet.
Save & Accept
Powered by